Investing through REITs is a good way of getting into real estate without having to manage the properties yourself. If you’re looking for REITs to invest in, you may want to consider Hartman vREIT XXI, Inc.

Get to know more about what type of REIT it is, what the Company’s funds invest in, how they perform in the market, and their performance.

Hartman Income REIT Management, Inc. and its affiliates, collectively referred to as “Hartman”, have been in the industry since 1983. With more than 35 years of experience, Hartman developed its core investment strategy of acquiring, redeveloping, repositioning, and re-tenanting properties in the office, retail, and industrial sectors. Their target market is specified within Texas, particularly Houston, Dallas, and San Antonio. Their office headquarters are located at 2909 Hillcroft, Suit 420, Houston, Texas.

Over time, Hartman has acquired more than 90 properties in the 23 investment programs that it has launched. Some of these are:

From here on, we will be focusing on the Hartman vREIT XXI REIT.

Hartman has 3 public REITs, but only 2 of them are currently operational. These are Hartman Short Term Income Properties XX (or Hartman XX)and Hartman vREIT XXI, Inc. Both REIT funds have similar investment strategies, so they may compete with investment opportunities. However, Hartman XX is already closed to investors with no remaining offering proceeds since March 2016.

Hartman vREIT XXI has been registered with the SEC as a Maryland corporation since September 2015 and started operating as a non-traded REIT in 2017. The REIT fund is not publicly accessible in NYSE or NASDAQ exchanges. Rather, investors can buy shares through brokerage and transaction-based accounts provided that they meet the suitability standards:

Please note that suitability standards 1 and 2 are an either/or requirement. An investor is eligible as long as he qualifies for at least one of both standards.

Hartman vREIT XXI started trading with an IPO of $269 million on June 24, 2016. It has public offerings for 4 types of class shares. They differ in administrative fees and commissions as shown in detail below.

A perpetual-life type of REIT has an indefinite holding period. The fair value of its common stocks is marketed through net asset value or NAV. This is determined quarterly for each share class as determined by the Board of Directors. When shares are offered in perpetuity, it means that the REIT can sell them continuously at a price that’s generally equal to the NAV per share price of the last quarter, plus upfront fees and commissions.

The downside of non-traded REITs is the illiquidity of funds. With Hartman’s share redemption program, investors can have intermittent liquidity quarterly under certain conditions.

Hartman’s total revenues come from rental income and tenant reimbursements. They own their properties and manage their daily operations through in-house property managers.

Hartman vREIT XXI invests in more than one sector, particularly in commercial and light industrial properties. They redevelop underperforming properties with strong acquisition criteria. Their investment portfolio consists of offices, retail spaces, industrial, and flex spaces which are leased out at competitive rates while taking advantage of Texas’ booming economy.

What the REIT Fund Invests In

Why Focus Investments in Texas?

From their SEC filings, Hartman has mentioned that they have no plans yet of acquiring properties outside of the United States. Currently, their investment properties are all located in Texas. Although, they are open to venture out to other states as long as the market is feasible.

According to 2019 data from the U.S. Bureau of Economic Analysis and The World Bank, Texas ranked 9th among the largest GDPs in the world, and 2nd in the United States.

Texas has one of the lowest tax burdens in the United States as recognized by the Tax Foundation’s 2021 State Business Tax Index. Texas’ lack of corporate income tax and individual income tax, along with its more than 14 million workers, makes it an ideal hotspot for businessmen and the civilian workforce.

Companies like the American Airlines Group and AT&T have their headquarters in Texas. Aside from the tax incentives, Texas also leads America’s export with approximately $279.3 billion in goods as of 2020 — a consistent feat for 19 years.

Although diversifying geographic locations is in Hartman’s future investment goals, it’s limited within the U.S. only and depends on future market trends. But thus far, Hartman’s specified target market is within the Texaplex area.

The collective experience of the Hartman affiliates in the real estate industry is a huge advantage for expanding Hartman vREIT XXI’s investment portfolio. Its acquisition process and listed criteria are as follows:

Its acquired properties are focused on:

The Company prefers enhancing property values and generating increased rental income instead of relying on periodic lease rates along with a favorable economy. 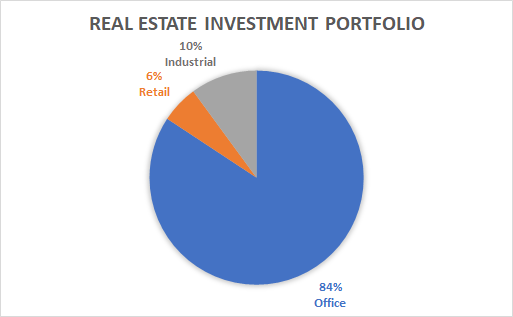 In terms of gross leasable area, Hartman vREIT XXI’s investment portfolio is comprised mostly in the office sector, followed by the industrial sector, then the retail sector. According to their Q2-21 report, the REIT fund owns and manages 10 properties with a total leasable area of 881,215 square feet. The full list of their properties as of June 2021 is shown below:

Here’s a sample look of one of Hartman’s properties — 11211 Katy Freeway. It’s a 78,000-feet office property located in Houston, Texas. You can view more of Hartman’s owned and managed properties in the Hartman Property Look Book. 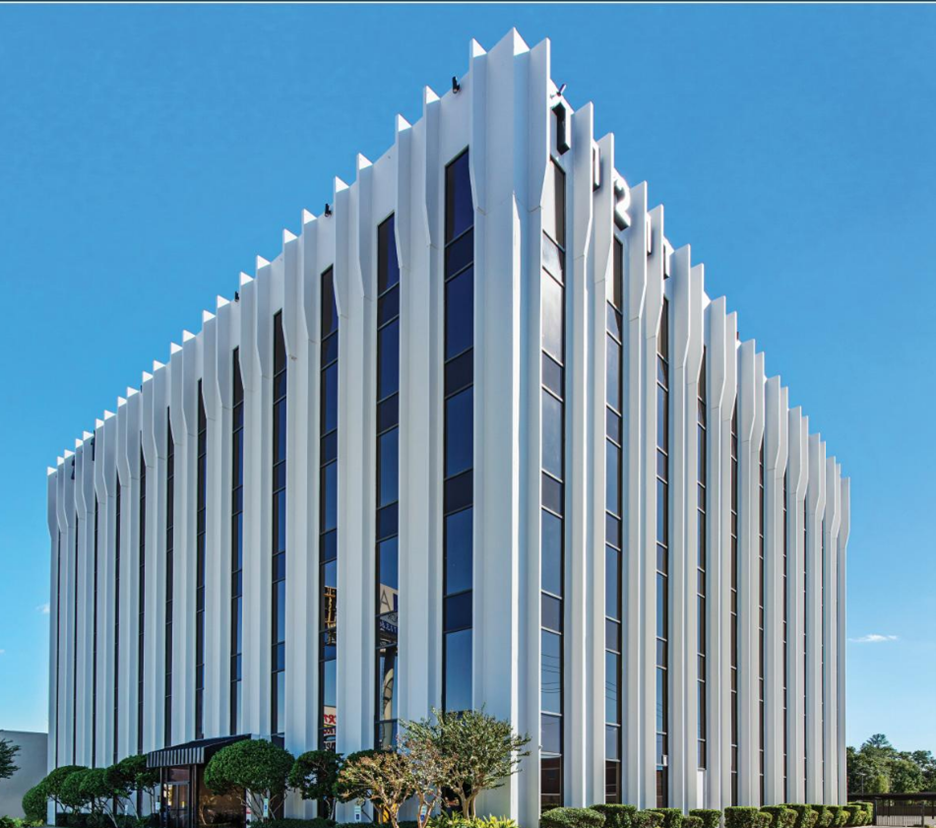 Hartman’s office sector is the top contributor to its rental revenues. The list also includes the 3100 Weslayan in Houston, Texas which was acquired on December 29, 2020. Hartman has an 83% tenant in common interest for this office property.

The 5 biggest office tenants of the REIT fund are

Moreover, 47 leases are going to expire in 2021, which accounts for 40% of the annualized total base rent of the REIT fund.

Key Performance Metrics Through the Years

The latest NAV price of Hartman vREIT XXI is $10.23 per share for all types of common shares offered. During its IPO in June 2016, the inception NAV price was $10 per share. If you invested early on during its IPO, there would only be a 2.3% increase in capital gain. However, rest assured that Hartman vREIT distributes dividends consistently, which makes total returns more appealing for investors.

As an investor, following the REIT’s financials is part of the due diligence process. Here are 4 of the critical parameters you should look at to measure the company’s operating performance:

Throughout the years, Hartman vREIT XXI’s total equity keeps increasing which tells us that the Company is acquiring more properties and minimizing liabilities at the same time.

The total revenue is also increasing — it even almost doubled in 2020 compared to its previous year. However, net losses were consistent every year. According to Hartman, the losses can be attributed to initial start-up costs, operating expenses before making investments, depreciation, and amortization expenses. The net losses in the first half of 2021 were primarily due to electricity expenses from the Winter Storm Uri.

But lastly, although there were net losses, cash flow from daily operations through FFO was increasing starting 2018.

Hartman vREIT XXI has consistently issued monthly distributions since January 2017. However, the distribution frequency in the future is not guaranteed by the Company. 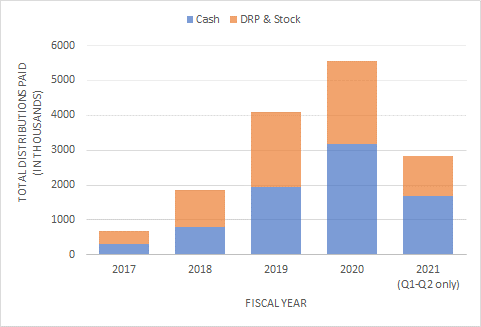 Since the FFO is increasing every year, so does the distributions.

But they can also issue distributions from other sources. Sometimes they are distributed as shares of common stock or DRIPs. Investors can maximize these by reinvesting them in Hartman’s DRIP programs for additional shares.

As usual, speculating on how the company’s performance will go in the coming years is more complicated than we think. More so especially now during the uncertain times brought by the COVID-19 pandemic.

However, Hartman remains steadfast with their Company’s vision — to grow the company to $2 billion in assets by 2025, and to $5 billion by 2030.

To gain context on how far the Company has to go, their total assets as of FY 2020 and FY 2019 are approximately $102 million and $90 million, respectively. In less than 5 years, Hartman’s investment portfolio must grow by about 5% to reach its 2025 goal. In comparison, Hartman’s total assets grew by about 17% in 3 years. Although, this happened early on during its inception. So, only time will tell if Hartman achieves these investment goals.